McConnell Dowell was engaged by Jemena under an exclusive ECI agreement to design and construct the Northern Gas Pipeline, opening up the Northern Territories gas reserves to industries in Mt Isa, Queesland.

McConnell Dowell's scope involved the design and construction of approximately 481km of 12-inch diameter high pressure gas transmission pipeline and associated pipeline facilities including two mainline valves and a midline scraper station. The pipeline transports gas from existing offshore and onshore gas reserves in the Northern Territory and will supply this gas to Incitec Pivot’s Phosphate Hill plant located south of Mt Isa and other users.

Some of the challenges faced on the project include:

Working as an integrated team with the client from the outset of the project was the key to success. Early contractor involvement and collaborative project management strategies enabled the team to develop innovative construction solutions

The effectiveness of this collaborative relationship enabled the pipeline team to generate optimal solutions at very competitive pricing. Success factors included the establishment of a high-performance project team, strong mutual understanding of roles and accountabilities and a robust framework for adjusting scope and price that provided Jemena with flexibility to adapt to market changes.

Through comprehensive upfront planning, strategic industry partnering, and a relentless focus on safety leadership and management, this high-speed cross-country pipeline project was successfully constructed through some of the harshest physical locations in Australia while achieving outstanding results in safety, productivity and quality.

Beginning with comprehensive and collaborative pre-planning to de-risk the project before construction commenced; through to the holistic safety and wellbeing culture created and nurtured on site, every facet of the project was subjected to strategic safety thinking, strong safety leadership and uncompromising safety management.

The project implemented the use of food dehydrators in the construction camps in 2018. All the food scraps from the camp kitchen where placed into these rather than the bin which resulted in production of good quality compost for use in the site reinstatement.

This initiative also reduced the number of rubbish trucks required to haul the food waste from the camp to either Tennant Creek or Mt Isa (600km trip each way) The dehydration system works by breaking down the food waste and driving off the moisture and drying the food mix.

Over the drying period of around seven hours the volume is reduced by 85-90% and the high temperatures sterilise the mix so that it can be used as a fertiliser.

Energy is used in the system but by avoiding transportation the reduction of carbon footprint is positive. The reusable solids left over from the dehydration process can be used locally in rehabilitation enhancement at specific high risk areas such as watercourses, nutrient poor environments or high trafficked locations as it will add organics to the soil.

Planned construction production rates were achieved or exceeded through detailed planning and management of risks including the adverse weather during the summer months through a complete project shut down for three months.

The record was a staggering 413 welds completed in a single day which was approximately 7.8km of welding completed on that day.

During the 2017 construction period over four consecutive days 39km of pipeline was lowered into trench and backfilled, well above the planned average of 3.5km per day.

The project achieved a weld repair rate of 0.92% and was the first in Australia to implement the use of Computerised Radiography (CR) technique. Advantages of the CR method over traditional films included:

Faced with the problem of providing a 280 person construction camp with efficient and reliable communications in an area with no existing network coverage, McConnell Dowell worked with Telstra Mining Services to use a trailer based 4Mbit Satellite-backhauled 3G Cell-On-Wheels (COW) also referred to as a SATCOW. The use of this technology meant that anyone staying in the construction camp had access to a Telstra 3G mobile voice connection to make calls to their loved ones back at home. This type of voice service provides better reception than the traditionally used Satellite communications which result in a substantial delay in transmitted the voice calls.

CAT Vision Tracking system was used to provide details of equipment such as physical location on a map, idle hours, operating hours and fuel burn.

HELIX In Vehicle Monitoring System was used to monitor driver behaviour. On typical cross country pipeline construction our biggest risk is driver behaviour as they drive to and from the work fronts each day. Driver locations can be tracked in real time to monitor behaviour in accordance with defined site conditions. This resulted in the project achieving in excess of 5.6 million kilometres without a vehicle incident. 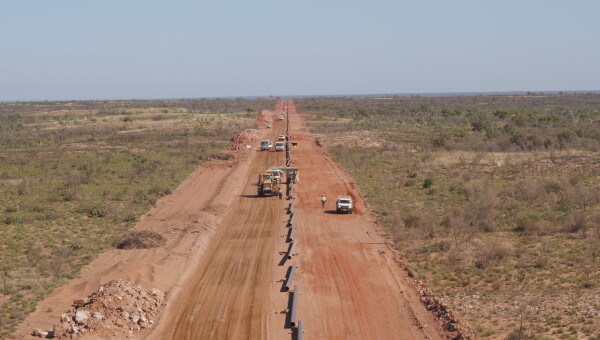 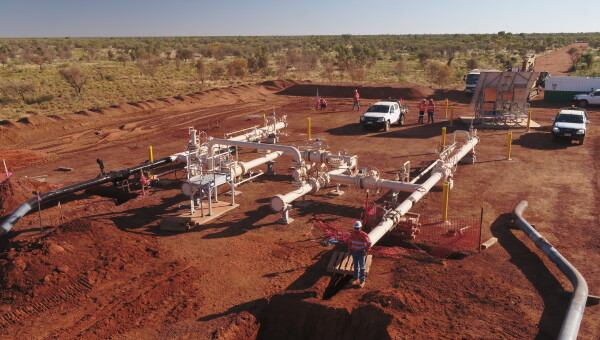 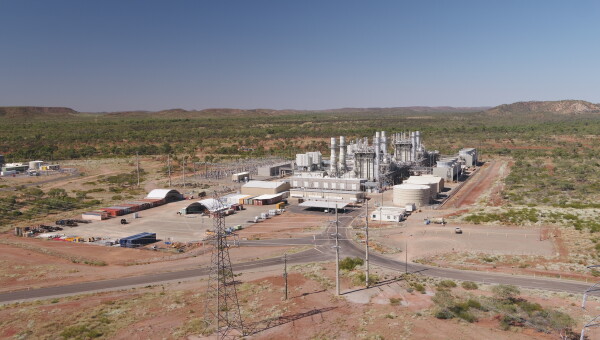