McConnell Dowell was awarded this D&C contract for the upgrade of existing wastewater infrastructure in the Glen Eden area to reduce the number of overflows that occur following periods of prolonged heavy rain. The physical works included:

Minimising disruption to residents and the general public was a key client driver. Space was severely restricted at Harold Moody Reserve due to the adjacent sports fields, children’s playground and underlying transmission main.
Access to homes and parkland at Sherrybrooke Place and Harold Moody Reserve needed to be maintained safely throughout construction.

The new transmission sewer running along Glendale Road is 10 m deep, and installing a pipeline at that depth had the potential to cause major disruption to local residents and the travelling public.

Another challenge was protecting and maintaining the integrity of the live 910 mm North Harbour Water Main which runs directly alongside the new tank.

The ‘caisson’ design solution is rarely used in New Zealand but more common in large European cities where space is at a premium. The in-house design team’s lateral thinking came up with a construction method that was cost effective and suited the location.

The construction method involved the installation of a steel cutting ring at the base of the walls, followed by the subsequent casting of three 400mm, 18.5 m in dia, 4 m high concrete lifts, one on top of the other.

After each wall section was cast the earth within the ring was excavated, and with the aid of the cutting shoe, the caisson walls sank under their own weight. The annulus between the outside of the walls and the cut profile was filled with bentonite assisting the caisson’s even rate of descent and prevent collapse of the external ground.

The project was run in a collaborative manner, with all parties contributing to its success through innovative design and construct solutions. A minimal site footprint on a main local road which reduced the impact to local residents was achieved through detailed planning of access shaft locations, their construction and the pipe installation method.

The Glen Eden project is scheduled for completion in mid-February 2018. 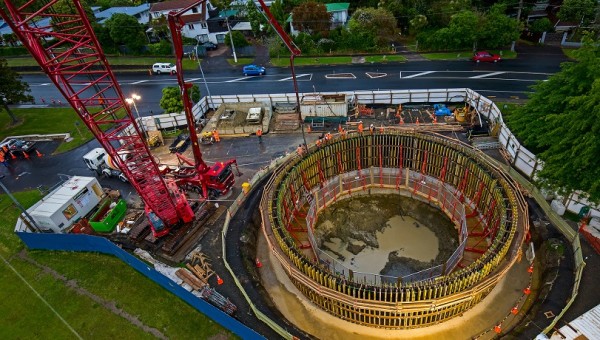 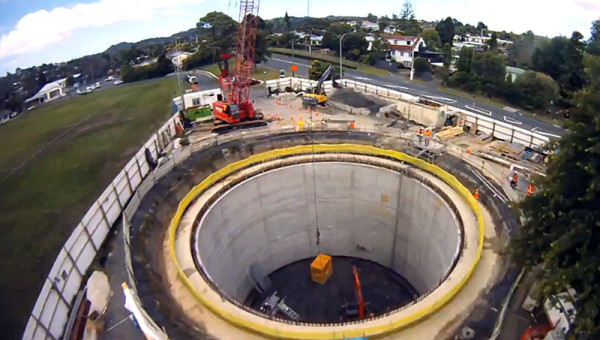